Laundry. My friend Lori calls it the “bane of my existence.” She has a family of five. I’m just me, but I feel the same way.

For nearly ten years, my estranged husband did the laundry. When we lived in a rental apartment, he hauled the hampers to the communal washers or the town laundromat. It was a bit of a Sunday ritual for him. In between the wash and the dry, he’d bring home breakfast sandwiches and coffee.

When we bought the co-op where I still live, he rolled our laundry carts through the hallway and took them down the elevator to the coin-op washers and dryers.

Tonight, while doing my laundry, I realized I take a lot of things for granted. I now do the laundry on Friday or Saturday nights. Sometime around midnight. There’s no toasted bagel or fresh coffee waiting when I return. Just cold Chinese food and cheap red wine or bitter light beer.

I practice a lot more gratitude these days. John, if you are reading, please accept my thanks for a decade of toiling over soiled clothes.

The act of doing laundry is, theoretically, not all that horrible. Put the clothes in the machine, pay a small fee, pour the soap, and press a button. The pain in the ass part has everything to do with time. And rules. 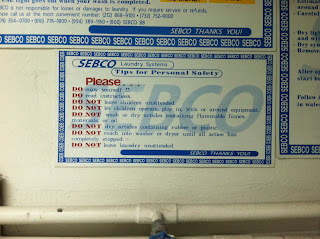 See, I live in a building with upwards of 130 apartments and only eight washing machines. I live a frantic, wheel-spinning life. To set aside two fucking hours where I have to remain both contentious of time and fully clothed (I have a personal “no pants” in the apartment policy) is torture. I’ve tried throwing in a load and bolting to the store while it’s on, but I always run late and some “neighbor” ends up removing my wet clothes and putting them in a cart. That really pisses me off. Hence, my practice of midnight laundry.

I didn’t always hate it. Recently, another friend had got me thinking about my childhood: specifically, where I grew up. My family lived in the upstairs apartment of a two-family house in Wallington, NJ. A Polish town. My childhood smelled of boiled cabbage and smoked kielbasa. Smells that were weird and borderline repulsive at the time but, strangely, now make my mouth water.

Our family of six was allowed to use the single washer and dryer in the basement. We were also able to store a few items – bicycles, inflatable kiddie pools, etc. – down there. But, the area was mainly storage for our landlord, Ed.

For some inexplicable reason, I took to wanting to do the laundry at some point in my youth. My younger sister and I would sit on lawn furniture that we set up in the basement for the duration of the wash and dry cycles. I was a few years ahead of her in school, and would tell her stories that I had memorized from my reading lessons. At that time, I was ahead of the other kids in reading class and would either have private sessions from Sister Roberta, the principal, or go to the grade ahead of me for classes. I think it was all some weird act of favoritism since I declared in kindergarten that I had the vocation to be a nun. But I’m not in Catholic school anymore. In fact, Sister Roberta would have a fit if she knew what I was up to tonight.

Anyway, MB and I would sit in the undoubtedly asbestos-filled darkness until the cycles were complete. In addition to the story telling, we’d “explore” the landlord’s section of the room. There was the usual “basement stuff” – lawnmowers, garden hoses, housewares – but also fucked up shit like rusted machetes and personal items that we felt a bit guilty peeking into. But as curious kids, we did it anyway. We were adventurous/creepy (still are) and that was exciting.

I remembered of all of this tonight. And I thought: “Why shouldn’t laundry be weird and fun? Why should I let the constraints of time turn this into a chore?"

Taking a cue from the Buddhists, I decided to practice mindful clothing washing. Upon entering the laundry room, I noticed the “Van Gogh in Arles” print. I had recently made a crack about how all mental health practitioners seem to have a print from that period in their waiting rooms. It’s a symbol of madness to be had. 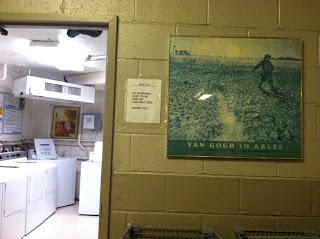 Then I noticed this odd painting over the top-loader that I had inadvertently caused to, um, go up in flames last November.

I tried to read the signature and date, but it was completely illegible. You figure someone who was capable of such a masterpiece would be able to write their own name and a date with a steady hand. 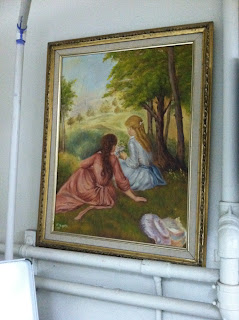 I poured my detergent, relinquished my modest fee, and went back to my apartment for 35 minutes. Chinese food. Beer.

Upon my return, I saw the one machine was done. The other still had 6 minutes on it.

The machine made a kind of rhythm and, as I was a bit drunk, kind of dug it. Two Filipino chicks with plastic red cups filled with rancid wine entered to pull their thongs and Daisy Dukes from the dryers. They were giggling incessantly and were over the moon about how the guy at the 7-11 proofed them for cigarettes. They must have thought I'm an old lady. They left and “my” machine STILL had 6 minutes on it. What the hell?

I’d been thinking a lot about the concept of time due to the influence of those same emails which made me think about my childhood. But fuck philosophy. I wanted to take my pants off.

Uggh. I had no choice but to wait.

The rhythm of the machine got me again. I silently started to recite A Tribe Called Quest lyrics to its thumps.

I unloaded my “done” clothes from the washer and threw them into an available dryer. Half-drunk, I tossed the lavender dryer sheets gaily into the dryer like rose petals before a bride and even did a few ballet moves. Shit. I’m glad there are no cameras in there.

But there is a ridiculous representation of roses in the room. 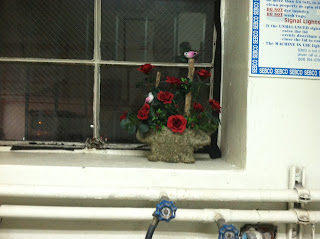 The washer was still on 6.

It was then that I became overwhelmed with the connection between my distant past, my recent past, my sort of present, and my now.

With one machine completing its cycle…and the other stuck on 6.
Posted by Toasterchild at 3:20 AM 1 comment: