There was an article on ScienceMag.org this month titled “The Final Word on Penis Size?”. Yes, it was phrased as a question.

The article explained the basics of an Australian (first problem) study in which researchers created 343 nekkid, computer-generated “men” who were comprised of various traits based on data of Italian men (second problem) associated with attractiveness and something called “reproductive success.” These included penis size, height, and shoulder to hip ratio. Women were shown a series of life-sized projections of these CPR-dummies with wangs, and asked to rate their attractiveness as potential lovers.

Just so you can play along at home, here is a sample of three of our CGI Casanovas: 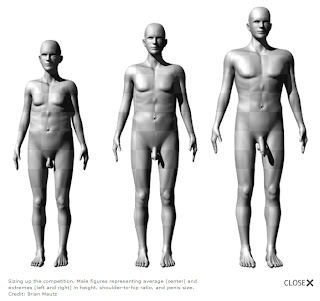 As one might expect, the models who were more generously illustrated in the genital region fared better as a whole. But there were exceptions. As the author put it, “the penis doesn’t exist in a vacuum.” Apparently, he hasn’t been on Amazon lately.

Seriously, though. The vacuum comment was to make the point that gray drones with other traditionally attractive features, such as above-average height and v-shaped torsos, could get away with slightly smaller junk than those the article referred to as “shorter or potato-shaped” models.

This saddened me as I couldn’t help but feel sorry for all the conventionally unattractive mock men. Hey, gray spuds, I’ll take ya any day over a stud…as long as you only have “eyes” for me. As a small-fry myself, I understand there may be more to your a-peel, lil’ silvery tater-tots.

Oh, but this is, erm, hard science, after all. Can’t let compassion get in the way.

Alright, I know I made fun of the fact that this was Australian research, but the most surprising comment in the piece came from one Dr. Jones, an American biologist who studies sexual selection and mate choice at Texas A&M University. Though since he is from Texas and, like their own state Board of Tourism says “Texas: it’s like a whole other country,” I’m not sure if his opinion is worth much of anything either. But here it goes:


“Just because a woman prefers a man with a large penis doesn't mean that she's going to find one. Outside the lab, there's greater variation and more traits to consider, so penis size might not be as important. That's good, because hurdles like competition with other women and her own perceived attractiveness could place her with a man who comes up a little short.”

Say whaaaaat? Is this fella saying that all the bitches outside the lab better check themselves because the “hurdle” of competition from hotties (cue the Victoria’s Secret underwear dance party that devolves into a feather pillow fight...ugh) and having inflated self-esteem regarding our looks will keep us from attaining a man with a monstrous member? Well, I looked up the good doctor and it turns out he is indeed involved in the study of sexual selection and mate choice…of fucking fish!

Yep, he is a marine biologist focused on “sexual selection, mating patterns, and gamete competition in seahorses and pipefishes,” as well as “the evolution of male pregnancy and the brood pouch” – whatever the hell that is.

Baffled by why ScienceMag.org would consult a marine biologist in regard to this human-focused “Down Under” research, I did some poking around the Interwebs. It turns out it wasn’t so far-fetched after all. In fact, landoverbaptist.org has published some shocking findings regarding male genitalia from the bustling undersea community of Bikini Bottom: 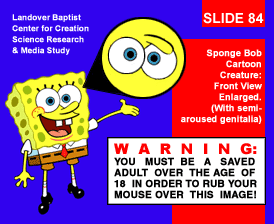 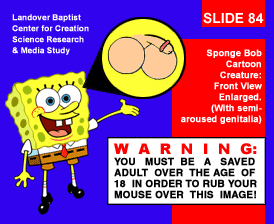 Ok, folks, this is just getting silly. So I’m gonna close with my usual advice that I’m not gonna take.

Size does matter, absolutely. But every person applies quantitative or qualitative measurement to something different, and that’s OK. For some sorry men and women, physical attributes are make-or-break. I try to avoid those types as their minds tend to be even narrower than the waists of those they chase. Others aren’t so much about the privates as they are about the Benjamins but, as we know, money can't buy intangibles. For me, it's certainly what’s behind the eyes – not between the thighs – that matters.

So, I guess the only thing we can do is be the best person we can be and hope that we find someone who uses a magic yardstick made to specifically measure that special something that we, personally, bring to this crazy world. And to hope that in those painful times when we feel that we don't or we can't measure up, we don't feel too beaten by a yardstick that wasn't made for us.

In the meantime, stay away from gray men, people who use the word "brood pouch," and that SpongeBob...as I think he may have ulterior motives.
Posted by Toasterchild at 12:55 AM No comments: