Intrigued by an ad in the local paper for the Edgewater Cultural & Historical Committee’s “Edgewater Ford Assembly Plant Auto Show,” which was to take place behind the McDonald’s on River Road, I set out for a little adventure this afternoon.

The car show was a bit of a wreck. The site doubled (tripled?) as a jitney stop for the concurrent Edgewater Arts & Music Festival and bordered the drive-thru entrance of the Mickey D’s. As such, many of the folks milling about couldn’t give a shit about cars, history or anything else aside from themselves or their Dollar Value Menu selection.

There was this weird “Adopt-A-Pet” truck that literally had dogs and cats stacked in glassed-in cubbies that attracted quite a crowd. For some reason, it made me recall an episode of HBO’s “Real Sex” where johns in Amsterdam got to pick their prostitutes from shop windows.

Anyway…back to the car show.

I think it was supposed to be mostly classic Fords, but somehow shit like this got in: 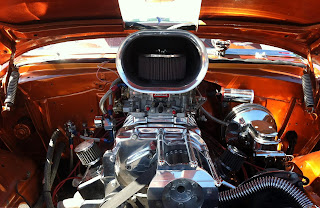 And who invited this boat? I mean, where the hell are the rest of us gonna park? Ha! 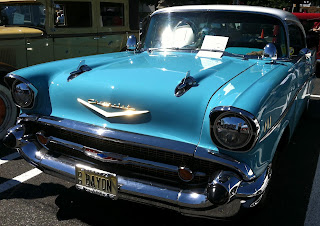 Shelby Cobras usually don’t do it for me but there was a phenomenal color scheme on this one – a dried-blood, plum/maroon/brown metallic with a beige stripe and beige interior. It was as classy as anything with red-eyed snake head knobs all over it is gonna get, I suppose. 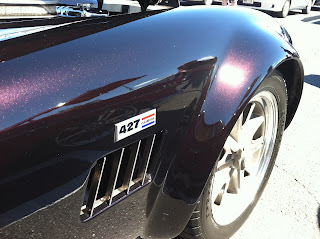 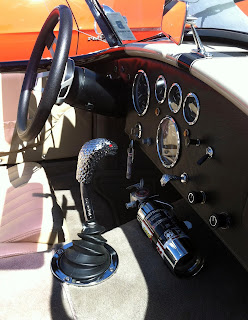 Of course, no Ford-focused show would be complete without the refreshing, minty deliciousness of a 1957 Thunderbird. 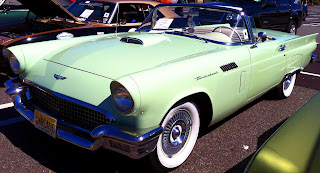 And, naturally, the weirdest guy there was the only fella to talk to me. Not about cars, but about the morals charge on which Sinatra was arrested in 1938. He was impressed that someone half his age (yes, he asked how old I was) knew the whole sordid story.

But all this is beside the point.

You see, I was on a mission to find out WTF this “Ford Assembly Plant” tie-in was all about. As I suspected, there was no one readily available to answer my questions. So I hit the Starbucks across the parking lot and awkwardly ordered a “tall black eye” from a tall, well, umm, African American male. Then I hit River Road for the three-mile straight shot back to my apartment where the geeking out commenced.

I was well aware that Edgewater had an industrial past. There are presently acres of land that serve as home to skeletal factory remains. Most of these mausoleums of manufacturing are Superfund sites and stand in stark contrast to the current crop of meticulously built and landscaped luxury housing and shopping complexes. However, I had no idea what a vital role the borough played in US manufacturing and goods transport during the final years of the 19th century and the first half of the 20th.

Edgewater’s birth as a borough of industry can be traced back to 1894. This is when the New York, Susquehanna & Western Railroad cut a tunnel through the rocky cliffs of the Palisades to connect the borough to its Jersey City line bringing coal, among other resources, to the area. Deep water piers along the several miles of Hudson River waterfront also allowed for the convenient import of raw materials and the export of finished goods by ship. These railways and waterways also facilitated public transportation for factory workers and executives who lived across the Hudson in NYC.

My focus here is the Ford plant but, just to put things in perspective, many other industries and big-name companies called Edgewater home for many years during that time period. Among them were manufacturers of chemicals; builders of aircraft; refineries of sugar, metals, and oils (petroleum and plant-based); processors of food products; repositories of coal; and various producers of consumer goods such as clothing and books. Some names you may recognize include Valvoline, Hess Oil, The New York Edison Company (Con-Ed), Jack Frost Sugar, Walden-Hinners, Alcoa Aluminum, Lever Brothers, Hills Brothers Coffee, and the Archer-Daniels-Midland Company.

It was the brainchild of the firm of noted architect Albert Kahn, who built scores of factories for Ford (River Rouge, Highland Park, Richmond, etc.), and facilities for Packard and other manufactures of large-scale assembly-line products. He also designed the Willow Run Bomber Plant as well numerous Ford showrooms, university buildings, and iconic office structures including the Fisher Building in Detroit.

Kahn even initiated the building of the Dodge Chicago Plant, which was leased for a very brief period by Preston Tucker and his Tucker Corporation, but Kahn died before that factory was completed.

The Edgewater Ford Assembly Plant, a complex consisting of several structures, was built between 1929 and 1931. The complex encompassed 38 acres of land and water bordered by the Hudson River to the east, River Road to the west, and the tracks of the New York, Susquehanna, & Western Railroad to the west and north. Because part of the main assembly building was constructed over wetland, an intricate beam structure of capped pilings was erected to serve as the base for the ground floor.

Meticulous attention was given to the layout of the complex (most of the 950,000 sq. ft. main building was two stories, which was unusual for that era) to ensure the infrastructure would support a streamlined assembly process: a line that would facilitate high volume and low overhead to churn out an affordable, mass market automobile. Of course, the state-of-the-art machinery within the building enabled that end.

According to several Internet sources (yeah, I know…but I don’t have a time machine to fact check) the Edgewater Ford complex was considered the most advanced and efficient auto plant of its time. It was very self-contained and included the main assembly building, an access overpass connecting the railway area to River Road (for pedestrians/workers and motorcars), its own power substation, water tower, boiler house, oil house, and tank pond.

It operated from 1931-1955 and assembled 1.8 million units ranging from Model As to WWII military vehicles. Today, it’s the site of some fancy-pants condo complex.

Now, I can go on and on about this having spent the better part of the day soaking up information like Superfund soil absorbs toxins. But, I suspect I’ve probably lost most of you already.

So to begin closing this out, I am going to post something a tad unusual. On the somewhat emotionally challenging evening of August 23rd, I took some time to sit on the Hudson River bank near the permanently moored, broken down Binghamton (the last surviving steam ferry still afloat built to serve New York Harbor) and took this photo south river. Note the highlighted portion.

Today, I found this undated photo of the Ford Assembly Plant. Again, note the highlighted portion.

I was just joking with a friend a few weeks ago that when I’m stressed out, I don’t retreat to nature. Instead, I prefer to stare at “civil engineering” – the older, the better. And if it’s on a waterfront, that’s a bonus. After writing this, I think I finally understand why. There is always a connection to the past – designers, pioneers, and idea people who mastered a task and whose work lives on to tell the tale – whether we are aware of the details or not. I guess it’s that connection to the past that I find comforting.

Well, at least it beats the comfort that anything from the McDonald's Dollar Value Menu can offer.
Posted by Toasterchild at 11:13 PM