I received this comment tonight from a fellow who came across this nonsense I posted on YouTube.

In all honesty, I think it's kind of sweet. Especially since his channel is comprised solely of videos of various transportation vessels and industrial shit blowing itself sky high. You know, the stuff all guys with "feelings" love to spend hours pouring over.

Hello
Thanks for uploading the transformer electric failure video. awesome and amazing sound and electric arcs!! don`t care about the haters on yt. your breathing at the end of the video is natural, and everyone who says the difference is a lyer or a poor person without feelings.

Posted by Toasterchild at 11:00 PM No comments:

For your viewing pleasure, here is an iPhone video I shot of the Royal Teens performing their 1959 Capitol Records hit "Believe Me" at a Music and Movies Under the Stars event at the Fort Lee Community Center on 8/11/2012.

This song was co-written by Fort Lee native Tom Austin and legendary songwriter/producer/arranger Bob Gaudio (an original member of the Royal Teens who went on to work on numerous hit records and projects, including those of Frank Sinatra).

Tom Austin, drummer for the Royal Teens, also wrote a fabulous book on The Riviera, a defunct Fort Lee night club and carpet joint that operated from the 1930's-1953.

Enjoy the audio...because, believe me, the video sucks.

Here is a quick video of the chaos that woke me up this morning. Unfortunately, the "announcer" was not blaring over the crap PA, no one was blowing their air horns, and no helicopters were flying overhead. So I apologize for the fact that this clip does not represent the full experience. You will notice that the bikes are going in both directions. That is because the southernmost turn of the cycle route loop is right outside my building. Jesus Christ on a bike.

Oh, and as I am waiting for this to upload, the "announcer" just came on and said "Only 66 more miles to go!" Yes, I can hear him loud and clear with all my windows closed.

Posted by Toasterchild at 12:02 PM No comments:

Hijinks on the Hudson

For the first time ever, the Ironman U.S. Championship – a triathlon – will be held in the NYC-Metro region. This day-long race will bring an estimated 2,500 athletes and 10,000-15,000 spectators to the area. The Ironman is hardcore: Athletes will swim 2.4 miles down the Hudson River, bike 112 miles along the Palisades Interstate Parkway, and then run 26.2 miles. The 140.6 mile course will have athletes coming and going through Fort Lee before they finish big in NYC.

Usually, I would not give a rat’s ass about such overachieving nonsense but this competition hits home. Literally. My street – the lovely Hudson Terrace – will be closed from midnight tonight through approximately midnight tomorrow to accommodate this race.

To appease the folks on the sidelines, as well as the holed-up residents of Hudson Terrace, event organizers have promised activities and incentives including, but not limited to, DJ entertainment and fair foods.

As if witnessing thousands of hard-bodies who can run, swim, and bike over a total of 140.6 miles of cliffs, dales, and river from the sedentary confines of my balcony is not going to make me feel enough like an utter failure, let’s add insult to injury.

Bring on the deep fried Twinkies!

However, the grease-trucking might indeed be cut a few hours short for those of us who have nowhere to go and all fucking day to get there. Why? Well, because nothing can ever go smoothly, it turns out that there was some kind of sewer line break that is requiring a “controlled discharge” of several million gallons of chlorinated raw human waste into the Hudson River a day before the race. As such, Ironman officials are considering sinking the swim portion of the competition.

Many triathletes are, understandably, not happy about this because rendering the race a biathlon (duoathlon?) will not only undermine their rigorous training, but it will hurt athletes whose strength is swimming. It will also impact the ability for winners to compete at the next round. Don’t ask me how; I didn’t consult the rule book.

OK. Now you are ALL thinking it. Why, of course an event planned to take place in New Jersey was gonna somehow be stymied by millions of gallons of shit! I mean, who didn’t see this coming from 140.6 miles down the busted pipe?

But before we cast the blame on New Jersey, I would like to make it known that the gasket blew in Tarrytown, New York. Yes, New York, NOT New Jersey. Though I suspect it doesn't really matter. This is not the first time New York’s crap washed up on our shore and we had to deal with the stink. 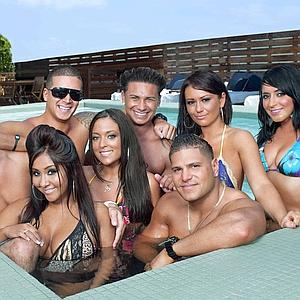 And it certainly won't be the last.

Anyway, it’s getting late and I gotta go stockpile “provisions” before the stockade surrounds my street. And by “provisions” I mean Blanc de Noir. Because in honor of the swim portion of the Ironman, I plan on making like the Hudson River and polluting myself...in a “controlled discharge” of Chandon.
Posted by Toasterchild at 9:53 PM No comments:

I have no secrets, I have no shame. Yes, it’s Friday night and I’m getting busy…with the archives. So, without further ado, I present tonight’s installment of midnight mid-century madness.

You see, sometimes something is so wrong it becomes right again. And this ad from the August 11, 1952 issue of LIFE Magazine is one of those things. The shocking image, the layout (which results in an odd floating chair effect), the “maybe I did it on purpose” look on the wife’s face, and the copy all work together to produce the most fantastically bizarre ad I’ve come across in a long while. Oh, the line “…woe be unto you!” is just brilliant. The biblical connotations alone – the juxtaposition of purity and punishment – render it sheer copywriting genius.

Thou shalt see for yourself:

Furthermore, in picturing myself over the knee of Mr. Suspenders (cuz that’s how I roll), I can’t help pondering the terribly dire repercussions of my next trip to the grocer's. You know, when I come home with tea.

Alright, enough of this fooling around. Back to the grind.
Posted by Toasterchild at 12:44 AM No comments:

Some of my pals seem to be of the opinion that I have lost my sense of humor lately. I assure you that is indeed NOT the case, and I promise I'll be back in the blazing saddle with all sorts of dry jokes and off-color comments before too long.

But in the meantime, here is a little "Natalie Kochmar original" piece – in the striking medium of ballpoint on legal pad – to show you that I'm still flexing my creative muscles. 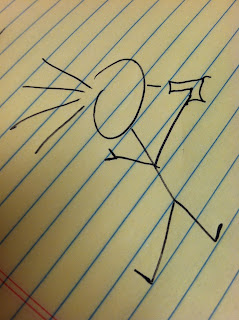 Jesus, where's your sense of humor?!?!?
Posted by Toasterchild at 8:56 PM No comments: