…Practiced at the Art of Deception

Several months ago, I attempted keeping a journal. The results were mixed. While it proved to be somewhat helpful for keeping the short-term memory straightened out, it seems the “therapeutic” value was lost to my critical, artistic, and impatient nature. In short, I was self-editing like mad and then getting pissed off because it read like rambling and wasn’t incredibly insightful.

I began to beat myself up about the fact that I was failing at something that legions of pre-teen girls have mastered for centuries. What was my fucking problem? 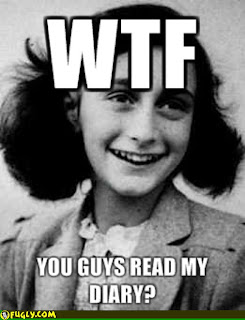 The whole idea of keeping a journal is to log the day-to-day, mundane as it may be, with the intention of interpreting it all at a later time. But that’s not what I was doing. I was kind of impatiently writing my own story rather than my own truth. It seemed I was “fictionalizing” my life with an increasing frequency. It was an odd thing; I knew I was doing it and I knew it was counterproductive. Yet, I couldn't stop. Why?

I boiled it down to the fact that self-examination is both an indulgence and a form of torture. But I am a sucker for luxury and a glutton for punishment, so this journaling shit should have come naturally, no? I mean, I guess there are much finer pleasures in life and much more interesting punishments, but that still doesn’t explain why I was lying in my diary. It’s not like I was avoiding the practice of writing, I was just being weird about it.

Then it hit me during a Rolling Stones cover band concert.

The situation reminded me of the season 4 finale of Californication where Hank Moody walks on to the lot where Fucking and Punching (his autobiographical book-turned-movie) is about to begin filming. It’s a somewhat surreal scene where his actual friends co-mingle with fictional counterparts of his loved ones on a set made up of mock-ups of scenery from his real life. With spartan dialog, the scene is set to a song. Yes, the song “You Can’t Always Get What You Want.”

I realized that, over time, the distinction between what I wanted and what I needed had become all kinds of fucked up. Everything had become so painfully real that the only way to face life (or at least the shit I was expected to put down in my diary) was to entertain the possibility that it was at least partly an illusion – a sort of movie magic, if you will. Just like that scene, I seemed to be inserting shiny surrogates of home and heart into my existence via my journal rather than wrestling with what was actually going on.

And the ending of the scene. Yes, the ending. The concept of driving at speed into a prop also seems to make a lot of sense to me right now. Everything in front of me is speculation – 2 year plans, 5 year plans, blah, blah, blah. It may all be bullshit, but as long as I realize my complicity in the bullshit, what harm is it to play along? And, who knows, it could be great. We get to have happy endings in movies. In fact, we are expected to.

I think we can all benefit from asking ourselves if creating our own stories and facing our own truths are really mutually exclusive exercises. When you think about it, the only absolute truth is that we all design our own destiny to one degree or another. By creating a kind of script in our head, we can do what we are taught is impossible in "reality" – choose our past and craft our future. As long as you are true to yourself, fuck everybody else. I've learned I don’t owe an explanation to anyone, and neither do you. What's wrong with making it up as we go along? All due respect to MJ, I do believe it is possible for us all to get what we want and what we need. It’s just that it may be more a matter of creative thinking than opportunity and determination.

So, there it is: what I’ve learned from “journaling” by not actually “journaling.” And, if you’re one for taking the advice of a mixed-up, dreamy contrarian, here’s one for you…

Put down the fucking diary and walk away. Run away. Drive into the “reality” of your creation. Live your life now and make sense of it all later.

…and, of course, enjoy this clip.

Posted by Toasterchild at 1:35 AM