At Some Point, I'll Write Again

But until then, here is a picture I took from my roof this evening and the words to a song that always makes me cry for some inexplicable reason. 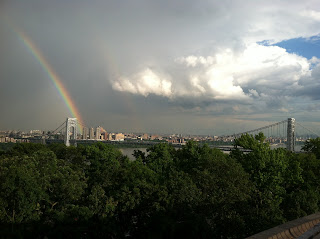 Why are there so many songs about rainbows,
and what's on the other side?
Rainbows are visions, but only illusions,
and rainbows have nothing to hide

So we've been told and some choose to believe it,
I know they're wrong, wait and see
Someday we'll find it, the rainbow connection
the lovers, the dreamers and me

Who said that every wish would be heard and answered
when wished on the morning star?
Somebody thought of that and someone believed it.
Look what it's done so far

What's so amazing that keeps us star gazing,
and what do you think we might see?
Someday, we'll find it, the rainbow connection
the lovers, the dreamers and me
all of us under its' spell, we know that it's probably magic

Have you been half asleep,
and have you heard voices?
I've heard them calling my name.
Is this the sweet sound that calls the young sailors?
The voice might be one and the same

I've heard it too many times to ignore it,
it's something that I'm s'pored to be
Someday we'll find it the rainbow connection,
the lovers, the dreamers and me