On this depressing, dreary day of drenching rain, here is an oddball phone pic of a puddle in the shape of New Jersey. The magic took place outside the back entrance to my apartment building. 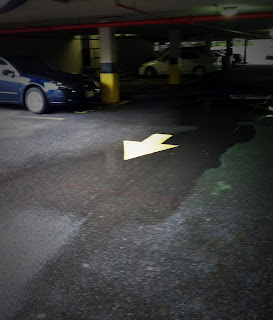 Posted by Toasterchild at 8:10 PM No comments:

The latest “successful” George Washington Bridge jumper took his life on April 1st. Before that, it was March 7th. And that seems about right. Or as right as something so wrong can seem. See, Port Authority Police do not make a habit of releasing statistics on George Washington Bridge suicides in an effort to deter copycats. But, based on existing news coverage, journalists say the GWB averages about one jumper per month.

They also say locals choose the GWB for their suicides as the structure itself serves as the iconic, inescapable backdrop for their emotionally draining lives.

I understand how someone can grow to hate it here. How being up so high can become a source of anxiety and even panic. How the feeling of being “on top” can impose a particular type of intolerable pressure; it is a long way down in so many respects.

Mid-span, the clearance to the Hudson River from the GWB is 212 feet. That’s about four seconds of 75 mph free-fall before impact. Four seconds before their bones shatter in a way so violent that the crushing of spirit that brought them to this place, physically and mentally, seems like a tumble in the fluff cycle.

Sure, I climb up there and look down thinking: “What if?” I thought about what would have happened if there was no fence when I slipped in the wet leaves while alone on the Long Path last New Year’s Eve. Would you have thought I did it on purpose? Where would that bottle of champagne be today? Surely, not in the apartment with the view.

But what about the out-of-town jumpers? What brings them here? There have been several articles written on “suicide tourism” a phenomenon built upon the hypothesis that folks seek out grand landmarks from which to jump to their deaths in order to make a bold statement about their lives. These architectural masterpieces represent the triumph of human accomplishment on one hand while simultaneously serving as a reminder of failure to those whose final break occurs in the cities they symbolize. Cities, like New York, that offer the dichotomy of isolation and inclusion. You may be lonely, but you’re never alone. There is always someone watching--though there is no guarantee they are paying attention, let alone care.

I (and countless thousands of others) was feet from my own window when that fellow jumped two weeks ago. I didn't see a thing, but my blindness was not for lack of heart.

Ginsberg wrote of the monstrosity of the high rises: “eyes are a thousand blind windows.” But we know buildings are not inherently evil. Ginsberg was high as fuck when he penned “Howl.” Everything is scary when you are detached from reality. Come closer to the window. We can't always see you, but we're here. We aren’t monsters.

Maybe that’s why I’ve always taken comfort in the view. For a reason I can’t quite articulate, I feel like I can’t fall. If I jumped, I imagine I could just take flight. And if I tired and began to descend, the arms of the entire city would catch me. Millions of hands to make for a soft landing and to provide a gentle push to get me back to where I belonged. Like launching a bird. You always said I was a little bird.

Perhaps that's why reading the term “successful suicide” today took me aback. I suppose success really does mean different things to different people. The jumper’s destiny is sealed a mere four seconds after stepping over the rail. Success, for them, is defined as an ending. A quick and certain ending that is 99.9% unfuckupable.

However, success defined as a beginning puts the reins of destiny into hands far less predictable than the grim grip of gravity. It’s still a free-fall of sorts--but one that takes place far, far slower than 75 mph. And it's a journey that can all shatter in far, far less than 4 seconds.
Posted by Toasterchild at 10:12 PM 1 comment:

“March Madness” officially came to an end yesterday when the University of Kentucky captured the men’s NCAA basketball title. Now, I don’t give a shit about college sports, and I certainly don’t give a shit about Kentucky. But, as someone who has at least a passing interest in humanity, I was intrigued by the “riots” that followed Monday night’s victory.

Post-championship wilding is certainly nothing new. In fact, Lexington police had a pretty good idea of what to expect as over a dozen out-of-control fans were arrested on Saturday when Kentucky advanced from the Final Four.

According to reports of yesterday’s incident, hundreds of police in riot gear were deployed to keep an estimated 15,000 fans from going apeshit like they did just 2 days prior. However, the police presence proved inadequate. Over 50 fires were set, more than 20 people were hospitalized, and at least one poor shmuck was grazed by unintentional gunfire.

I get that there is generally nothing doing in Kentucky and that people can be very passionate about their sports. But I really have trouble comprehending why people would go so far as to risk an arrest record to celebrate a college basketball win in such a chaotic manner.

See, I could at least understand if it were the players who went berserk. I mean, you’re all pumped full of adrenaline and whatnot. But we are talking about FANS. They personally didn’t win anything yet they saw it fit to celebrate by overturning cars and groping women? I suppose it has something to do with mob mentality and the fact that people like to take credit for things they did not achieve.

Like John F. Kennedy said, “Victory has a thousand fathers, but defeat is an orphan.”

He liked to grope too.

Anyway, it goes without saying that those who participated in this nonsense lacked good judgement. So, before they sent their flaming sofas into the streets, they probably did not give much thought as to where they would sit to watch the madness next March. 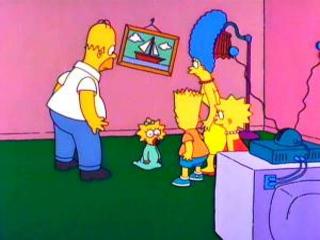 Eh. I’m probably just wasting my time trying to figure out the “why” behind this behavior - attempting to attribute it to school pep or sportsmanship when it’s probably just the result of youthful exuberance and alcohol. I should just accept that I’m not meant to understand it because I am old and know how daunting finding a new living room set can be.

Or maybe my lack of empathy is due to the fact that “my” team, the New York Mets, haven’t won a damn thing in 26 years. Forget setting furniture ablaze in the name of extreme team spirit. The only thing I’m lighting these days is a candle to St. Jude, the patron saint of lost causes. 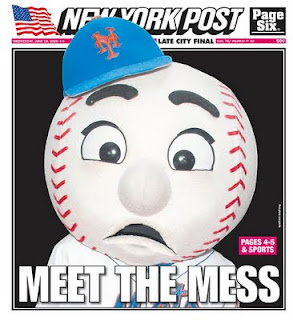 Posted by Toasterchild at 10:48 PM No comments: