Spirit In the Sky

While catching up on the news of the week, I was particularly drawn to the story of the American Airlines flight attendant who went berserk. If you haven’t heard, a cracked cabin aide took control of the intercom and delivered a diatribe which included such gems as "Oh, I forgot to take my meds,” and “Captain, I am not responsible for crashing this plane.”

Members of the flight crew as well as passengers physically subdued the poor thing while she screamed: an outburst described by one witness as “demonic.”

According to experts, this incident was the inevitable consequence of extreme workplace stress. It seems the airline industry is fraught with hectic hours, comparatively low pay, and a challenging work environment.

Say, how is that different from the atmosphere at any other workplace? In fact, I just read an article on how Chinese factory owners literally wrap their facilities in wire netting so workers can’t jump from windows to their deaths. You don’t see the Chinese melting down or otherwise making escapes via emergency slip and slide thingies with mini liquor bottles in tow. Oh, right. The netting.

Anyway, my point is that I tend to think the stress level in such a place may be slightly more intense than it is at American Airlines.

And that is precisely why I’m siding with the onlooker and sighting demonic possession as the lone and only reason for this event. The problem isn’t corporate greed at the expense of the worker. Nonsense! It’s the Icarus-like hubris of man to think he is worthy of flight. God did not give us wings. As punishment for our pride, Satan’s stewardess paid the price for all of humanity who finds it acceptable to fly, if you will, in the face of God’s plan to keep us grounded.

But where does that leave us? Airline travel is a multi-billion dollar juggernaut that not even the Almighty can abolish.

I have an idea. And while it may only be a Band-Aid measure, I think it can work. I propose the US Government mandate an undercover exorcist on each and every flight. Not only will this calm the nerves of passengers on the heels of this news story, but--more importantly--it will prevent any possessed flight attendant from serving up pea soup the hard way. 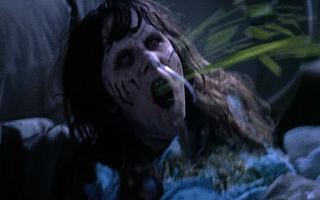