Mary Pols, a TIME columnist, wrote a piece appropriately entitled “Why I'm NOT Taking My 8-Year Old To The Hunger Games.” If you are reading this, I’m guessing (at the very least) your secondary address is “under a rock.” Thus, like me, you have neither an 8-year old nor a clue as to what The Hunger Games is.

But, just like there is no need to run out and adopt an 8-year old so you can deny them life experiences, there is no need to view the film The Hunger Games to play along with this post. Here is my secondhand summary of the book-turned-movie: in a post-apocalyptic world (surprise!), teens are sent – via a government-sanctioned lottery – to the wilderness where they battle each other to the death while on the TV. According to people who have time for this nonsense, themes of this story include oppression, poverty, self-preservation, power, and downfall.

If that's the case, maybe everyone should skip the box office and just let the 8-year olds talk to anyone over 35.

Pols points to the film’s vivid violence as the main reason why THG is inappropriate for youngsters. An illustrative quote:


Nearly two dozen kids aged 12 to 18 die by machete, sword, blows with a brick, a spear to the chest, arrows, having their necks snapped. All damage inflicted by each other.

And we thought WE had it rough with dodge ball in junior high gym class. Ah, those halcyon PRE-apocalyptic pubescent years.

As extreme as this violence sounds, me thinks Pols needs to pop a pill. And I should know as I am an expert…on film violence, not pills. You see, I was raised on horror and graphically violent films, which is precisely why I spurn them as an adult. My mom, who mad-crushed on Tom Savini and named my younger brother after the lead character in A Clockwork Orange, watched them with us and explained things like “special effects” and “imagination” to me and my siblings. In hindsight, I think it was a valuable life lesson. I mean, we may have grown up into a bunch of fucking weirdos but, as kids, we were never frightened or fooled by movie magic like stunt fighting or elaborate makeup. 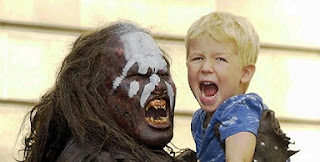 Perhaps Pols can take comfort in the anecdotal evidence that exposure to gore at a young age completely turned me off to it in later years. Really, I couldn’t care less if my eyes never see “fantasy violence” again. Furthermore, I feel the experience has contributed to my character in several other positive ways. For one, it has helped me develop one of my more special talents: the ability to give sarcastic running commentary during horror films thus spoiling the fun for anyone who generally enjoys the genre. 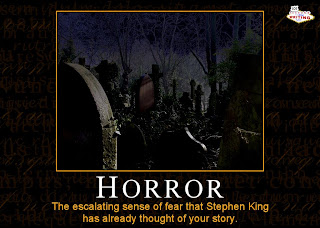 And this baptism by celluloid carnage has also deepened my dark sense of humor, which a few oddballs actually appreciate. True story: I once chased a Jehovah’s Witness around with a bag of fake blood saying “I’m going to transfuse you!” in the most Dracula-esque accent I could summon. Though, in that context, my actions were more along the lines of psychological/spiritual thriller than horror. But, I digress.

So, having established my authority on the subject, I've got a message for Pols and any other adult who is about to forbid their kid a ticket to see The Hunger Games. There is obviously a shitload of peer-pressure on pre- and young teens to see this film. If you don’t take them, they will find a way to see it without you. And if this crap really does cover the themes it is purported to, your kids will need you there to explain it to them. So take them; turn it into a teaching moment. And, while you are at it, seize that opportunity to also explain that movies are not real, that violence is usually unnecessary, and that junior high gym class really isn’t that bad.
Posted by Toasterchild at 10:21 PM