Every so often I get sucked into the vacuum of what I call NPRworld. A place where people spend a disproportionate amount of time telling people how culturally relevant they are instead of actually doing culturally relevant shit. I'm not gonna lie, it's a place full of people I envy.

Last week, Fresh Air featured a strange(r than usual) interview with Grant Achatz. I had no idea who he was either. He is a Chicago-based chef and restaurateur (I still don’t understand why owners of restaurants get their own word) who is a tongue cancer survivor. He also had two books published, so I assume he is an author too.

But the reason he was on the show was to discuss his approach to food. He does not approach it with a fork and knife, or even chopsticks, the way the rest of us do. No, this is NPRworld. And this cat’s claim to fame is “molecular gastronomy.”

So, to quote Nuke LaLoosh, “What's all this molecule stuff?”

According to Wikipedia, molecular gastronomy is “a modern style of cooking, which takes advantage of innovations from the scientific discipline.” In practical terms – and I use the term “practical” with some hesitation – this means he does things like freeze edibles that usually don’t solidify due to very low freezing points (he specifically mentioned olive oil lollipops). He also accompanies certain dishes with a perforated pillow case designed to release fragrances, such as leather and firewood ashes, while diners eat. It sounds to me like the performance art version of date night – dinner at Pizzeria Yoko Ono. But to those who know a hell of a lot more about these things than I do, it’s some pretty groundbreaking stuff. 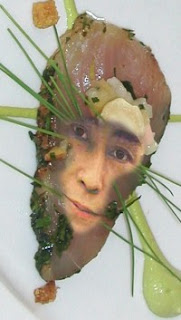 Now for the most important question…“why?”

It seems that by rendering (my word, not his) food and enhancing the dining experience in such unusual ways, eating becomes elevated to an intellectual exercise. This may be complicating things a bit much, but then again I read that reservations for one of his restaurants can go for $500 on Craigslist. I’m assuming that’s not prix fixe either.

Some things I guess I am just not meant to understand.

One matter he did touch upon that I kind of wondered about was why “gourmet” portions are traditionally so miniscule. I’ve always assumed it had something to do with backlash against today’s mega-mart mindset. Rare for the sake of being rare – a sort of market fixing. But what he said on the subject was interesting: it’s not necessarily about the scarcity of ingredients, it’s about their usefulness. And it’s actually a great life lesson.

The reason, he stated, his meat course is only two ounces has nothing to do with nutritional sustainance. It’s because after ten bites, the palate is done experiencing its flavor profile. To take the plate to 15 or 20 bites is simply overkill. There is only so much “sensation” one can take before the experience is ruined by excess.

Kind of like listening to too much NPR.
Posted by Toasterchild at 9:46 PM