I’ve been making a habit of breaking up my workday by ducking into the chapel on my way to lunch. It’s usually a given that I’ll have the place all to myself (surveillance camera notwithstanding) and the dim quiet, cheap religious paraphernalia, and rare chance to experience that floral-musty smell that is too often reserved only for funeral parlors have strangely become a bit of comfort in my over-stimulated world.

Sometimes I do what one is expected to do in such a place, which is to entertain impure thoughts. Other times, I earnestly meditate on aspects of my life and try to summon guidance -- or at least try to summon the courage to consume whatever is being served in the cafeteria. But on days like today, I just stare at the crucified Christ and think of random crap.

Like light bulbs...and the iconic Easy-Bake Oven. Sure they both throw off heat, but that’s not where I’m going with this.

For nearly half-a-century, the most successful toy oven -- launched by Kenner in 1963 -- used the heat of a 100 watt incandescent light bulb to cook miniature sugar cookies. And, by extension, propagated an anti-feminist agenda. 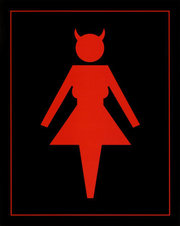 The changing times would appear to have been the death knell of the Easy-Bake Oven. As more women entered the workplace, or were otherwise encouraged to "marry up," home economics-themed toys took a backseat and sales slumped. Our increasingly litigious society even forced a recall of the product when kids began burning their fingers and otherwise setting playrooms ablaze. Furthermore, formerly fun foods like artificially flavored sugar cookies were deemed unsafe at any size. And now, it would seem the final blow has been delivered to the perennial Christmas gift favorite as governments worldwide are outlawing the incandescent bulb.

But things are not always as they seem, as I found out while reading the day’s news.

See, just as my chapel buddy Jesus rose from the dead, so has the Easy-Bake Oven. Hasbro (who bought Kenner, another sign o’ the times) announced today they are releasing a new, bulb-less streamlined version of the oven. Outfitted with a "heating element," as opposed to an old-fashioned light bulb, the new gadget will appeal to "young chefs" and feature "trendier snacks" to reflect the modern culture.

Now, I say this whole redesign is a goddamn sham. If they really wanted to mirror modern culture, they would have included a housekeeper.
Posted by Toasterchild at 8:04 PM