It’s taken me nearly two years to download this photo off of my phone (and, no, not because of technical ineptitude): 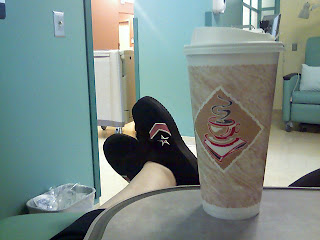 On July 8th of 2009, I had my first dose of chemotherapy (this followed surgery and preceded the start of radiation). It seems I thought it would be a good idea to take photos showing the process, literally, from my perspective. Along with the above snapshot, there is another photo from that day of my right arm, which was attached to the pump. While not graphic per-se, it’s a little hard to look at.

There is a stark difference between the two photos. This one has a kind of cool, Gen-X vibe – you know, with the shorts, Converse, and oversized coffee cup. There’s even a spray of light coming through on the left side. If you ignore the steri-packaging in the trash and the infusion station in the background, it could have been taken anywhere. However, the other photo is clearly one of someone who has “a problem.”

Though I’m not ready to write in detail about my experience, I will say this period wasn’t the worst of the treatment process. I had no idea what was to come when I took this photo. But as I am often reminded, the side effects could have been a whole lot worse. And the alternative to treatment was not an option.

People sometimes say to me “I don’t know how you did it” in regard to treatment. And I’m not being a wise-ass when I tell them “Neither do I.” Because I really don’t. It was fucking hard, but I just made up my mind and plowed through.

Two years later, I wonder if I still have that strength. Or if it even was strength. Maybe, just like it is with these photos, it was simply the choice of one perspective over the other.
Posted by Toasterchild at 6:49 PM