John, Marybeth, Dan, and I stood careful watch at the American Cruisers event on Saturday to catch people in the act of peeping my ride. 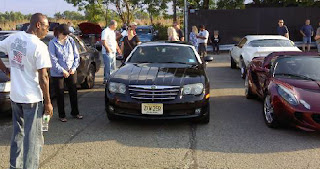 Dan even went so far as to simulate licking the trunk to entice onlookers. In hindsight, that probably worked against us.

Anyway. The show is billed as Bergen County's best weekly cruise night, and is a great way to spend a few hours - especially if you are into 50-70s stuff. As for the "New Classics" section, well, it's a mixed bag. You'll see vehicles ranging from straightforward (mine) to "customs" which, seemingly, can also pass as small movie theaters and dance clubs. Among the later models of note was the fabulous Lotus Elise, despite the badge on its dash that read: "RIP Ronnie James Dio." Some things just can't be explained. 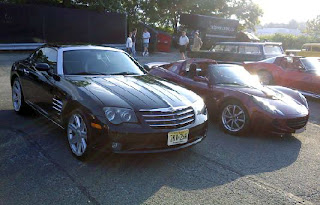 As for the vendors: the model section was pretty beat, but some cool T-shirts were bought.

Oh, and we saw Tabatha Coffey driving though our neighborhood (which is, apparently, her neighborhood too) on the ride over. Can't beat that.
Posted by Toasterchild at 1:55 PM