I am not really one for romantic comedies, but something I saw today tripped a memory of a scene from the college-dormmate favorite Say Anything. It was the dinner table dialog where what’s-her-name’s father asks Llyod Dobler (John Cusack) about his plans for the future and he busts out with this:

So, what made me reach back into the restless recesses of my brain for a quote from a 1980s John Cusack movie? Job listing after job listing for various forms of Social Media Professionals!

Seriously, had that exchange taken place today, ol’ dad could have suggested to Lloyd a career in Social Media as a viable alternative to professional kickboxer.

For many years, folks who know stuff have been harping on the US for its transition from a manufacturing economy to a service economy. Great point, I totally agree, and I concur that we are living with the fallout of that move every day as we see the main export of the US become “jobs.”

Furthermore, I have been baffled by the offshoot category of “economy,” the economy economy – where money is made on manipulating money. But I can at least swallow the idea of someone making money trading securities, etc., if not completely understand it as a construct. In fact, the simple detail that I don’t understand it demonstrates it requires some kind of specialized knowledge which may very well make it a valid career. Kind of.

But this Social Media Professional bullshit is just plain nuts. It’s a career based on nothing – not even the house of cards that is the economy economy. I mean, Tweeting for a living? Getting paid for devising a Facebook “strategy”? Enrolling in a $2K weekend seminar to come away with an understanding of the role of Social Media in brand development?

Now that I think of it, maybe it's not so crazy after all. In fact, Social Media content generation could qualify as a new sector of manufacturing...manufacturing more stupid shit for the Internet! That seems to be the one thing we can never, ever have too much of. 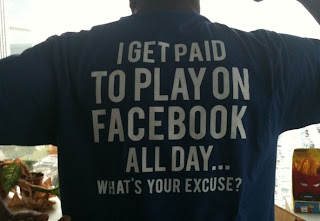 Epilogue: I just saw back-to-back commercials for Tostitos and Arby’s. Both ended with Facebook and Twitter icons and pleas to like/follow them. Wow. I never claimed to be the most popular chick on the block but, even in my loneliest moments, I can honestly say I’ve never been tempted to befriend a roast beef sandwich.