I’m not sure how I didn’t read about this, but the Pope made some very interesting comments back in October. The following is from the Montreal Gazette (maybe that’s why the story hadn’t made it onto my radar...):


"New technologies and the progress they bring can make it impossible to distinguish truth from illusion and can lead to confusion between reality and virtual reality," the pope said.


"The image can also become independent from reality, it can give birth to a virtual word, with various consequences -- above all the risk of indifference towards real life," he said.

My first thought was that the Pope has some substantial stones to call out anyone or anything for confusing “reality” with bullshit. But then I sat back and thought about this concept -- imagining it had come from someone with whom I’m generally in philosophical agreement. Coupling that new perspective with a recent experience, I’ve actually begun to think his Holiness’ point may not be limited to just his hat.

I’ve been contemplating the purchase of an Amazon Kindle e-reader. Yeah, I know. I’m not an especially “on-the-go” type who needs anything beyond my own imagination to keep occupied for the 10 minutes a day I’m not working on something. Plus, there is something to say for the whole tactile experience of reading “material.” On the flipside, the thought of reducing my heap of said material to a six by 1/3 inch device intrigues me. Imagine a coffee table I can actually fit a cup of coffee on. Hell, maybe if I had more coffee, I’d be more on-the-go. See, then I’d be glad I bought the Kindle.

I’m starting to make the Pope look sane with this build-up.

So, I’m on Amazon dot com and thanks to whatever voodoo exchange of personal info is going on in the background, a recommendation for God Hates Us All pops up. No, not the album by Slayer. The novel by Hank Moody.

I’m not sure how I didn’t read about this either (John’s ringtone for calls from my cell is the Californication theme song, so yeah, I should be on this shit) as its release was not limited to Montreal. Moving on...

For those of you who are completely lost, I understand, and offer the following: a) Amazon is an online seller of actual books; b) Californication is a (non-reality) TV show; c) it’s main character is Hank Moody, a writer, and; d) God Hates Us All is a book he authored. What makes this even more convoluted, is that the Hank Moody character was heavily influenced by Henry "Hank" Chinaski, an autobiographical character (alter-ego sounds sooo Sasha Fierce, but sure) of Charles Bukowski.

Got it? So, let’s have some real fun and connect those dots! If you have a Kindle, wi-fi access and $11.99, you can have an actual novel authored by a fictional character who was created by a real-life television writer based on the alter-ego of a(nother?) novelist beamed to you in under a minute.

If this isn’t what the Pope was talking about then I don’t know what is. Shit, I bet Benny the XVI had the same pop up on Amazon that I did. Really, if I were the Pope, you bet I’d wonder what something called God Hates Us All was all about. 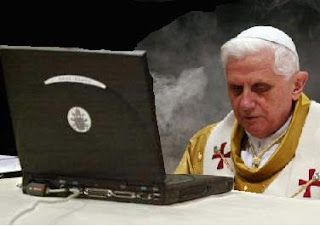