The numbers may vary slightly, but the first few Googled statistics on New Year’s Resolutions are pretty much in line with the following:

Another “fact” regarding goals in general and NYRs in particular, is that the most effective success tactic is telling others about them. The reasoning, I suspect, behind this approach is that you will be held to your resolutions through fear of failure, humiliation, or public ridicule.

Looking back over this spotty blog, I’ve noticed the spectacular lack of personal details. I say an awful lot without actually telling anything. (As an aside, I can’t help but think this shit would be a whole lot more entertaining if I could name names and such, but I have to protect the innocent...and myself). Maybe it’s just a way for me to avoid failure, humiliation, or public ridicule.

So, in keeping with both the spirit of the season and this blog, I've made a decision -- I will make an NYR, but I will not share it. Instead, I leave you with this:

My random, non-committal, fit for public consumption goal for 2011...

I will bring back the phrase “Sit on it.”

Hell, why not? Retro is the rage -- and not much else seems worth bringing back. I mean, Justin Timberlake beat me to “sexy” (by, like, five years) and I don’t think anyone is gonna bring back the economy anytime soon... 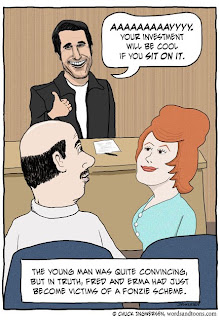 So there it is. And come December 2011, I dare any of you three squares who read this thing to hold me to it.
Posted by Toasterchild at 6:04 PM