Health dot com is a wonderful place. For those who haven’t had the occasion to visit, it’s an online oasis of quizzes, calculators, and other self-diagnostic tools over which to whip yourself into death-obsessed frenzy. It’s the type of place where 15 minutes of reading can lead you into a locked office bathroom where shaking hands triangulate a compact, wall mirror and your shoulder. You know, so you can inspect that mole that is surely going to KILL you yet, strangely, does not worry you enough to get it checked out by a professional.

At least that’s what I imagine happens to some people who read it.

While pokin’ around this hypochondriac’s paradise looking for hot pop-heath topics, I came across an article that caught my preglaucomic eye (hey, I took the quiz): “More Dementia on the Job.”

No shit, Health. Ya don’t say?

A few words into the piece, I realized the article was not some sarcastic dismissal of our Dilbert-like waking lives, but a serious examination of how neurological disease in our “aging workforce” is affecting the workplace dynamic.

Cue the experts for opinion:

"People just can't do their job as well as before," Dr. Morris says. "These changes or declines in mental ability are subtle, so co-workers will cover up at first and make excuses such as 'Well, Fred is getting over the loss of his brother' or 'We just got a new computer system.' Gradually, their level of responsibility has to keep getting reduced so the person is either let go or kept on in a largely ceremonial role."...

"Eventually the diagnosis is made when the impairment is to the point where no one can ignore it anymore," Dr. Lyden says. "People come to me because the forgetfulness has gone beyond names and phone numbers to include meetings, key decisions, and reiterating and rehashing decisions that have already been made."

..and, cut to the peanut gallery for commentary:

Let’s start with that first snippet. The person they are describing is most certainly not affected with dementia. They simply have “seniority” or “tenure.” I mean, who the hell wants to attend computer training when you are just hanging on another year or two until your nest egg fully gestates? It’s those who would willingly sit through a new user workshop and all its hard bagel, PowerPoint madness that need their head checked. As for “Fred” and any other lucky old bastard that can that milk the death of a relative as an excuse to avoid such nonsense...can you say crazy?

And, Dr. Lyden. I think it’s safe to say you have not spent one damn minute in the business world. You see, we have things called meetings, which are LED by people who exhibit the very “impairments” of which you speak. Yes, the “demented” are IN CHARGE!!! I suggest you see the forest for the trees, Doc: if it weren’t for folks forgetting key decisions and/or repeating and rehashing decisions that have already been made, we wouldn’t even have a workforce -- let alone an aging one. 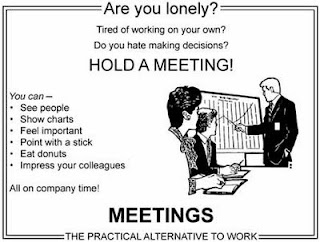 Oh, Health dot com. In all your self-diagnostic wisdom, you should have included an interactive quiz to accompany this article. It could help those in our “aging workforce” determine if they actually have a degenerative brain disease or if they simply no longer give a poo.
Posted by Toasterchild at 8:59 PM