According to the "official arbiter of recessions," the Business Cycle Dating Committee of the National Bureau of Economic Research, we are in recovery. Yeah. And so is Lindsay Lohan.

According the the arbiter of what is stupid, me, the NBER, and CNN for that matter, are in need of psychological review. 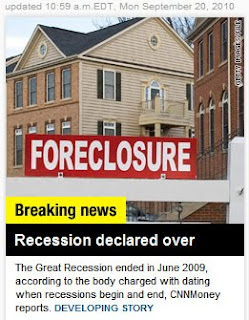 Posted by Toasterchild at 7:59 PM 2 comments:

I wake up to 1010WINS AM news radio. In the time it takes me to get myself ready for work, I hear a broad range of headlines and just enough detail to respond to elevator questions with honest answers.  “Is it supposed to rain later?” Yep. “Did you hear that 'The Situation' is going to be on Dancing with the Stars?” I’m one step ahead of ya.

For some reason, I was paying especially particular attention to the business recap on Wednesday. The MarketWatch reporter said stock futures were up despite less than spectacular reports from what seemed like one sector after another. Of note was a report from automakers that said sales figures from August 2010 were the WORST IN 27 YEARS. The reporter said industry folks called the figures “disappointing.”

I am aware that the stock market has no basis in the reality where 99% of people spend their time, but seriously, in what other industry is a bottoming out – 27 years in the making – considered “disappointing”? When they discontinue a favorite lipstick shade, that’s disappointing. 7-11 Slurpee machine down? Disappointing. This? This is, like, historically bad.

Among the other strange comments…some key reports showed “negative gains” (a bizarre term in itself) but, as these losses were not as bad as predicted, investors are expected to be optimistic. Huh? Oh, yeah, and the private sector “shed” 10,000 jobs.

While wrapping up, the reporter said that perhaps futures were up simply because Wall Street is just “happy to turn the calendar” on an abysmal August. I can just picture it. Those who hold the purse strings of our economy waiting out the Dog Days: “I was holding off on creating jobs and throwing shitloads of money everywhere until the gals in accounting put away their open-toe shoes. Those shoes are so very, very distracting. Now that the summer’s over and HR mandates closed-toe pumps until June, I can flip that calendar page and get down to business. OK, who wants to buy a Chevy???!!!”

Given the sense the rest of this bullshit makes, yeah, I can totally see that. How disappointing.
Posted by Toasterchild at 11:01 PM 2 comments: