There have been several parallels drawn by writers in both the financial and the automotive fields between Tesla Motors and the Tucker Corporation. The similarities they cite: an IPO that precedes a structured manufacturing process, a wicked penchant for PR, and an appeal to the independent spirit.

But, while I won’t buy a single share of TSLA for $17, I’ve gladly forked over $100+ for an old Tucker stock certificate (ironically, via PayPal, a company founded by Tesla CEO Elon Musk). This got me thinking as to why I roll my eyes at one “dream,” but embrace the other.

I guess it has something to do with the scrappy, underdog image possessed by Preston Tucker vs. the  celebrity kiss-ass, near billionaire status of Elon Musk (although the story of Musk’s true net worth changes daily, no doubt due to his impending divorce).

Musk has been put forth as a genius entrepreneur. And I don’t dispute that characterization. He has founded highly lucrative computer software systems, a fucking space exploration company, the aforementioned PayPal, and a bunch of other crap that I’m not even going to pretend to understand.

But as anyone who is familiar with the story of Preston Tucker and the Tucker Corporation (or at least has seen the movie) knows, the “Government” – in quotes because it was multiple entities, from Congress to the SEC – was the main reason why Tucker was not given a fair chance to succeed.

Preston’s predicament could not be further from the one in which Elon finds himself. In this culture, “going green” is not only the right thing to do, but is also extremely politically popular and fashionable among those who have the dough to spend on an upscale electric vehicle like a Tesla. As such, Tesla has landed Government subsidies out the wazoo, including a fat $465 million loan from the U.S. Department of Energy, and will most likely continue to get government subsidies for the foreseeable future for things like providing green jobs, etc.

Furthermore, if you visit Tesla’s website, you’ll see all pricing info is followed by an asterisk. Unlike “regular” car advertising, the asterisk does not indicate a higher “as shown” price or “taxes, title, and other fees may apply.” Nope. In fact, its purpose is to signify that the price shown includes a $7,500 U.S. federal tax credit. Yup, they are actually shaving $7.5K off the MSRP for advertising purposes. If, by some divine miracle, Tucker ever got the car-buying public a federal tax credit for purchasing his 1948 sedan,  he’d be strung up by his heels for “false advertising” should he shear it off the base price and print it in an ad.

And there’s more. Part of Tesla’s business model is that they hope to “subsidize” the development of the “affordable” ($57 K w/o the tax credit) Model S with the sale of their $100K+ Roadster. That’s just screwy. Tucker’s whole premise was to provide an affordable, safe, family vehicle right off the bat. Not to sell the rich-and-famous a novelty roadster and then take it from there.

One last point (there are countless others, don’t even get me started on design!). Tucker was unwilling to sell out. There are already rumors that Tesla’s destiny is to become a tech company, not an auto manufacturer, with the intention to sell battery packs and other “green” technologies to established manufacturers. Maybe that’s why the company hired George Blankenship, the man behind the Apple Store, as Vice President of Design and Store Development. Given Musk’s history of mergers, sell-offs and other deals, this seems not only believable but inevitable.

So, as for the similarities between Tesla and Tucker? Well, I guess they both start with the letter “T.” 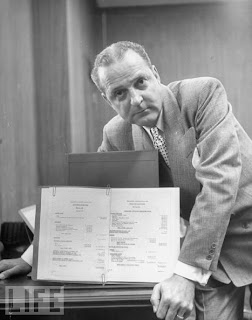 Posted by Toasterchild at 3:58 PM