This weird Russian espionage thing that's gripping New Jersey and the Nation is just...so...weird. But what’s even weirder is the news coverage. Since there is no real information on the purpose of the “deep cover” exercise, reporters are focusing on the “spies” themselves – personalities, jobs, lifestyles, that sort of thing.

In a particularly hilarious LA Times article titled “Spy suspects led average American lives,” which reads like something out of The Onion, reporters offer examples aplenty as to how these folks were super-duper superficially American – and thus were able to throw neighbors and friends off their collective trail. When not transmitting code over radio (really? radio?), the suspects haggled over mortgages, occasionally forgot their computer passwords, and used social media. One even drove a green Honda Civic.

While I admit I too would be fooled by these outward displays of mediocrity, there was one itty-bitty detail that tripped my suspicion meter. Big time. And it’s all summed up in this one sentence describing a neighbor’s account of the actions of alleged communist spy Cynthia Murphy:

“Once she saw her walking home with a bunch of daffodils and a French baguette.”

Now, if you’ve seen any television at all, you know that there is nothing that says “average American” better than a brown paper bag with flowers and a loaf of French bread sticking out of it. Especially in commercials. We see independent women loading ‘em into their CR-Vs; we witness men clumsily clutching ‘em as head-turners wink at them on city streets. And the children! We see those all-American kids hungrily grabbing at ‘em as mom returns from a shopping trip that has brought her unprecedented Wal-Mart savings.

Do you see where I am going with this? The bouquet plus the baguette was just too staged. It was a sloppy disguise move equivalent to donning a Groucho-style glasses/nose/mustache combo. Seems like a pretty comedic act for calculating communists to make after years of intense training on how to avoid detection.

Maybe they mixed up their Marxes. 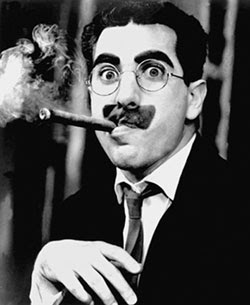 Posted by Toasterchild at 6:38 PM 2 comments:

My Other Car is a Tucker...

Just a quick pic to show how fabulous my weekend has been. Yep, that's me and the one-and-only Tin Goose. And yes, it did get better. Seriously. 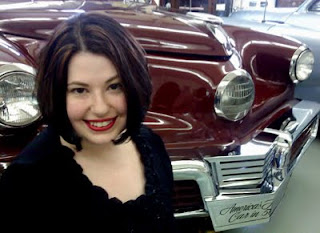 Multiple sources report that the blogosphere (side note: my spell check actually recognizes “blogosphere” as a real word, uggh) is “erupting.”

The reason behind this seemingly bizarre string of corporate communication has to do with GM wanting to maintain global brand consistency. It seems only folks in the US use the term “Chevy” and there is international confusion when folks outside the US visit the Chevrolet website and see the word “Chevy.”

Most of the spewing is being done by advertising and marketing types who, in summary, feel GM is behind the times in its branding strategy. They claim most companies are now favoring shortened versions of their name (think “FedEx”) to suit the modern consumer. Blah, blah, blah.

And what’s the blogosphere without the comments from the masses? Let me also sum up their position for you. Throngs of “Chevy” guys and gals are outraged at that GM would want to take their beloved term of endearment away and force them to say the longer by one whole sylable “Chevrolet.” My theory is that people, presumably the heartbeat of America (sorry, couldn’t resist), think it sounds French or something and this is just one of those “freedom fries” things.

But, back to the eruption.

I clicked through about a half-dozen (shame on me) posts. Pros, cons, reasons, excuses…whatever. But then I came across this explanation:

"I get calls from international colleagues asking me 'What is a Chevy,’" said German-born GM spokesman Klaus-Peter Martin. "It takes quite a long time to explain to them."

Maybe I’m missing something here, but a GM spokesperson should be able to answer “what is a Chevy” in his sleep. And he is German-born, so his style should be efficient (though he does have two first names, so something’s up…perhaps he’s half French?).

So, what is the reason it is so difficult to explain why “Chevrolet” would be shortened into “Chevy”? As far as nicknames go, it’s pretty intuitive. But, these are international colleagues, so maybe there are language barriers or something. 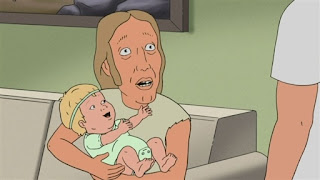 Want to start a real eruption? Just imagine trying to explain to an international colleague why, in the US, we call fat guys “slim” and the downtrodden “lucky.” Only in America!
Posted by Toasterchild at 10:07 PM 3 comments:

On Saturday, I went to retrieve the last of my "stuff" from my dad's house. It was sold and the official closing is just days away. I didn't exactly grow up here, but it was our family's first house. We moved in the spring of 1991, which was the summer between 8th grade and freshman year of high school. It was cool in a way because I got to start "new" and go to public school for the first time (it was Catholic school until then). It also kinda sucked because I didn't know anybody.

After high school, I began my Midwestern misadventures which brought me to Minnesota, then Ohio. Eventually, though, as an early 20-something in debt and brokenhearted, I came back to 86 Home Ave. At that point, my parents had divorced and it was known as "daddy's house."

Slowly, I got my shit together, paid my bills and met John. As luck would have it, the man who is now my husband lived about a half-mile from that house (also in debt and brokenhearted when we met). Our first date was at a Chinese restaurant two blocks away. Not too long after that August day, we got our first apartment. Again, about two blocks away.

Over the past few years, 86 Home Ave became a place to store boxes and celebrate the occasional holiday. I never really thought about it all that much. It was always there and somewhat taken for granted. A place for us kids to go when we couldn't quite make it on our own. Where there was always some kind of barking dog, or screeching birds, and more than enough Budweiser for everybody. Like every other place in this crazy world, good times were had there as well as bad.

While we were pulling away on Saturday, I couldn't help but get choked up a bit. I talked to "daddy" yesterday and he said he felt the same way. 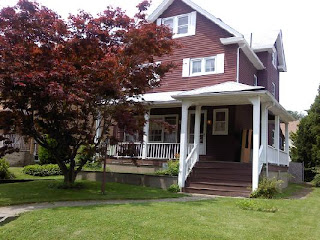