Literally. The lady in the apartment down the hall was shooting a comedy short. He signed our DVD and took a quick pic. We're on the list to see him at Caroline's tonight. Should be fun. 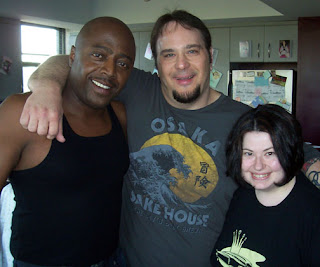 The Food Network is hawking the Guy Fieri “Knuckle Sandwich” cutlery collection just in time for Father’s Day. Curious as I am, I had to click on the offer in my email and see what these nifty knives are all about. Uggh. There is nothing more lame than kitchen gear, well, geared toward men. But this testimonial from the Big Bite “star” is so enticing, I almost, ahem, bit:

"I’m a Hot Rod guy who knows that in order to do car-building right, you need high quality performance parts. The same idea applies to cooking, so the right knives are key. My product features a combination of the best materials with a design that will blow your mind! As a chef, restaurant owner, and TV personality, I have high expectations for my equipment and these knives meet and exceed all of them."

Just kidding. Though I do wonder how, exactly, my mind would be blown by cutlery design.

Notice how “hot rod” equates to masculinity in Guy’s peroxide damaged brain. My father can’t even change a tire, let alone be considered a “hot rod guy,” but he wouldn’t be caught dead using the lame-ass knives. Guess I’ll have to look elsewhere for a gift. 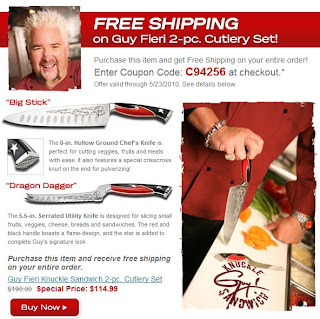 The only time a man belongs in a kitchen is when he’s installing cabinets or reaching something off the top (or second or third from the top, in my case) shelf. (Maybe that's a bit sexist --but it's OK as you'll notice it offends both sexes. Sorry transgenders). I take my kitchen seriously!

Here’s how it started…

A 5-year-old girl in Georgia is being asked a series of questions in her school library. The girl, who is white, is looking at pictures of five cartoons of girls, all identical except for skin color ranging from light to dark.

As she answers her mother watches, and gently weeps.

OK. I think what we are missing here is a small thing called the point. When little kids are not being absolute trolls, they often speak the truth in their simplicity. Her preference for the light colored doll has nothing to do with stereotypes of African-Americans taught at home, school, or portrayed in the media (well, maybe it does, but that’s a different essay).

If you read this at all (instead of instantly expressing outrage) when asked why the white doll was good, she replied “because she looks like me.” That’s right. The girl has healthy self-esteem and chose the one that looks like her when asked to distinguish the doll with positive qualities. And what does her mother do, she weeps. Good fucking job, ma.

As humans, it is our nature to compare ourselves to other humans. As evidenced by my whacked-out self-esteem issues, I am an expert at this. The key to making yourself feel good about yourself is to not get wrapped up in the qualities of others, whether its skin color, height, weight, education, income, whatever. And the best way to do this is to focus on our own identity and positive qualities. That’s what kids do. They are self-centered because their world really is all about them. Their gold stars and hogging all the toys and shit. If the girl said “I abstain from answering this question because it may cast me as racist” then I’d say we have a problem. But she didn’t. She thought that she was bringing attention to her good qualities not casting aspersions upon an entire population of black dolls. I call that natural.

Notice I am not saying we shouldn’t appreciate or respect differences. My point is that we should not get so painfully aware of our differences that we weep from white guilt and self-loating when a child responds the way a child should respond.

The kid is not racist; the doll is not human. The kid does not understand that stating a doll with apparently no other distinguishing characteristics except for the fact that it is a lot darker is "A LOT DARKER” is somehow wrong in this day and age. She is unaware of Andersen Cooper’s blog. The person who interprets the statement of the 5 year old to mean something “racist” is the racist -- or just so PC that they are afraid to be labeled “racist” if they don’t interpret this doll picking as an outrage.

As adults, when we think about our place in the world, we can get crazy and overwhelmed. In many ways, the word in 2010 is a giant free-for-all. If we can hone our focus on who we are and where we fit in, I don’t think that’s a bad thing. Again, I’m not saying “Ohhh…whites can’t fit in with blacks.” I am saying that if we need to develop healthy personal identities before we can step forward and say “we live world where everyone has value and I am just one piece of this mosaic called humankind.”

Feeling good about yourself and correlating positive adjectives with things you identify with (even if it’s a doll) is healthy. It’s instinct. It’s survival. The kind of thing a 5 year old can remind us of.

So, read that and weep.
Posted by Toasterchild at 7:49 PM 2 comments:

I picked up the rest of some old and interesting photos this weekend. Many were parts of series. Already, I had found out some were original photos of a "famous" Cord L-29 and so forth. Below is one of four of a Bugatti racer that has some pretty identifyable markings. That is, if you know what the hell you're looking for.

Can anyone help me out on this? The other photos were of the engine and a full body shot with some young children looking on. It's on a tree-lined, residential street. Photo is printed on Kodak/Velox paper -- so developed in the 50s.

Let's figure this out! 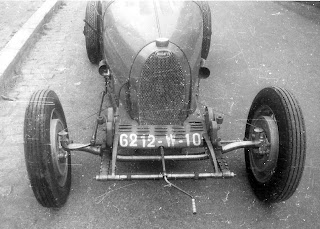 Posted by Toasterchild at 5:42 PM 3 comments:

Forgive Us Our Trespasses

Somehow, we ended up on Atlantic Beach on Long Island's South Shore today. I was completely bummed to find out this place is verboten during the summer unless you are a member of an Atlantic "Beach Club" (dilapidated, hotel-like structures that seriously look like something only accessible by time machine). Since I didn't ask for permission, guess I'll settle for forgiveness. God created beaches anyway, right? Damn the man-made rules.
Hope y'all ain't made sick by our whimsical sweetness. 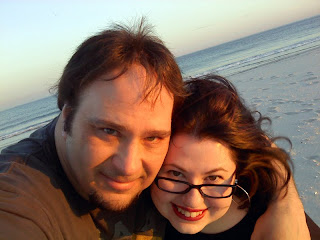 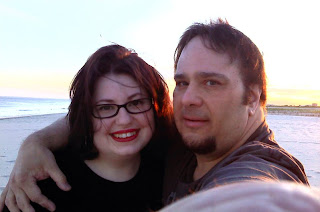 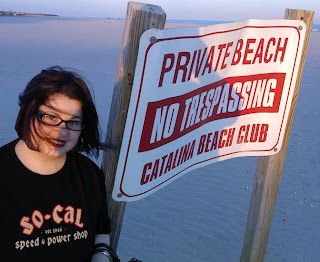 Posted by Toasterchild at 12:33 AM No comments: