I read an article today aptly titled “Tobacco in Candy-like Form Can Poison Kids.” It examined a new wave of artificially flavored, smokeless tobacco products that are, allegedly, going to confuse and/or entice the youngsters. This confusion will lead them into a downward spiral of addiction and eventual death from nicotine poisoning, choking, or cancer (or maybe all three, I didn’t read to the end).

You’re probably thinking “Wow, I want to try these.” Well, that’s exactly the point. Designed to be desired by a new market segment (read: middle schoolers) these nicotine delivery devises assume the shape of breath strips (my personal favorite as a kid), and snus. Whatever the hell a snus is.

Here are some excerpts from the at-odds experts quoted in the article:

"Nicotine is a poison, and now we're seeing smokeless tobacco products that look like Tic Tacs or M&M's, which parents can leave on the counter and children can be attracted to."

"The packaging of Camel Orbs and the other dissolvable products is ‘100 percent child-resistant in accordance with Consumer Product Safety Commission standards’ and bears a label that says ‘Keep Out of Reach of Children.’"

I won’t credit either statement because they are both equally ridiculous and the people who were quoted should be ashamed.

Anyone can see that the issue here is not nicotine-infused breath mints. It’s whether or not tobacco should be banned. This battle, which seems to come to a head every so often, is moot. It’s one fight that is never going to be won (until we have socialized medicine), because it is so screwed up. Because it is so American.

The problem is not the new Camel Orbs or snus. It’s the hypocrisy of the American Way. What we have here is a big fight among the treasured American ideals of capitalism, freedom, science (from both sides of the issue), agriculture, etc. You’ll notice I left out common sense – yeah, that was on purpose.

Looming large in this debate are capitalism and freedom.

Ahh, capitalism. “Big tobacco” has pretty much admitted that their products are addictive and cause all sorts of health issues. But, despite the “medical community” and “Government regulators” they still have a product. They are running a business. To that end, they need to keep that product viable to stay in business – support the economy and all that. How does a tobacco company keep a product viable? By reformulating and repackaging like every other fucking consumer product. Oh, and by groooooowing their customer base.

And freedom. Yes, We the People have the freedom to put whatever we want into our bodies. Except what the Government tells us we can’t, like trans-fats and sex toys (if you reside in Texas). Let it ring.

So, the “medical community” and, apparently, the youth are shit out of luck on this one. 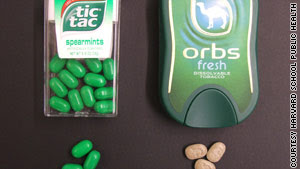 And while the Orbs are no doubt dangerous, like most things that look pretty and taste good, I still want to try them.