So, CNN.com tells me Gene Simmons and his not-his-wife were on The Joy Behar show last week. They talked about sex. A lot. No, really. I’m not making this up.

We all know Simmons prides himself on his “My only vice is women” shtick. That’s fine...by itself. But I scratch my head when he repeatedly declares his disapproval of drugs and alcohol. This got me thinking about vice in general and the ranking of such vice-ey activities. Among other tangential things – can one vice really be “better” than another? And why do people perceive certain vices as unacceptable yet applaud others? In other words: why do we shake our heads (and fingers) at the fat guy enjoying a Newport, but give Simmons his own TV show?

I tend to agree with the old Julia Child quote “Everything in moderation, including moderation,” but I can certainly spot when things have gone overboard.

To be clear, I consider Simmons’ sex nonsense a “vice” just for the fact that it is so extreme, not because I am Amish. According to self-reports, Simmons has had sexual relations with approximately 4,600 women. I’m not sure what constitutes “relations,” but to rack up 4,600, I’m gonna guess it ranges from anything more than a peck to a full-on poke. Regardless, it’s a hell of a lot of women (and I’m unclear on whether or not this figure accounts for multiple encounters). 4,600 of pretty much anything constitutes a vice.

These days even saying you are an occasional smoker will get you the stink eye. You like to smoke weed? Get off welfare, you lazy ass! Let’s not forget the degenerate gamblers. And a pox on you if your vice is food-related (unless you are thin) – you, sir, are a slob and are the cause of the nation’s obesity epidemic and the sole reason why we are all going bankrupt paying for healthcare.

The bottom line is that Simmons is not alone in his vice prejudice. Not by a long shot.

Seriously, why is this? Think about it...you only have to have sex once, for like a minute, to get pregnant or catch an STD. Even if I gambled everything I owned in one bet, the worst off I’d be is broke (Russian Roulette not withstanding).

So what gives? As is the answer 99% of the time I ask these kinds of questions: who the hell knows.

Of course, Simmons is free to do whatever the hell he wants. I just don’t get the one-sidedness of his thinking.

I guess I favor the old-time, multi-vice kind of celebs – like Dean Martin and Frank Sinatra. Wine, women, and song…all while smoking a cigarette and letting it ride.

No one seemed to have a problem with them. But that’s way before CNN. 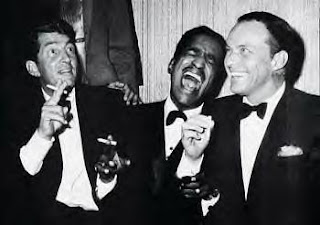 Posted by Toasterchild at 7:21 PM